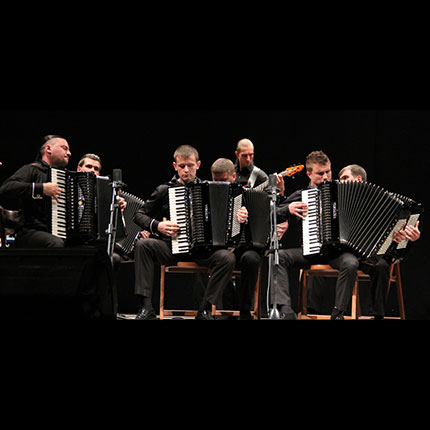 Accordion Ensemble “Concertino” was founded on 18th October 2003. From beginning the group has set itself the goal to revive a classic accordion in Republic of Moldova. Unfortunately, by the vision of our people, accordion was perceived in Moldova just like a popular instrument. For this reason, group members have decided to show the public that the accordion can be interpreted not only popular music, but classical, jazz, world, light music, etc. The ensemble is made up of seven accordionists, one bass player, pianist and drummer – students and graduates of the Academy of Music, Theatre and Fine Arts of Moldova.

In three years “Concertino” managed to stand out thanks to sustain a numerous solo concerts in prestigious halls of the capital, such as the “Organ Hall”, National Philharmonic “S. Luncheivici”, National Opera and Ballet Theatre, National Palace and in other parts of the country. Since 2006 the team opens a new page in the activity – participation in international competitions. Until present “Concertino” won 12 trophies at the accordion competitions all across the Europe, thus confirming the words of the great master accordionist Richard Galliano, who once upon on a concert called the ensemble as “the best team in Europe”. On 2007 came true one of the dreams of group: “Concertino” was taken under the aegis of one of the most prestigious concert organizations – “Organ Hall” in Kishinev, where the team is enjoy till now by supporting of whole administrative group and especially of director of the hall – Mrs. Larisa Zubcu. A separate part of ensemble´s biography took a concert activity abroad. Touring in Italy, Denmark, Germany, France, Austria, Czech Republic, Lithuania, Latvia, Luxembourg, Belgium, China, Azerbaijan, Russia, Poland, Romania the group always let the audience fascinated and delighted by his skill and temperament. In one of those tours “Concertino” established a friendly relation with great masters of accordion, as Richard Galliano (France) with who later held a concert in Moldova and France, Frank Marocco (USA) which remained extremely impressed by the music of the group, and Coba (Japan). The repertoire of the group is very various and contains different genres of music. “Concertino” performs from classic and romantic to jazz, Piazzolla´s tangos, modern, light and also popular music, collaborating with composers from Moldova and also from abroad. For the future «Concertino» plans to undertake large projects, both solo and in collaboration with artists, bands and composers working in various genres of music, to promote the accordion in all areas of art. Richard Galliano, who plaied many times whit Concertino Accordion Band is an important promoter and fan of this band.