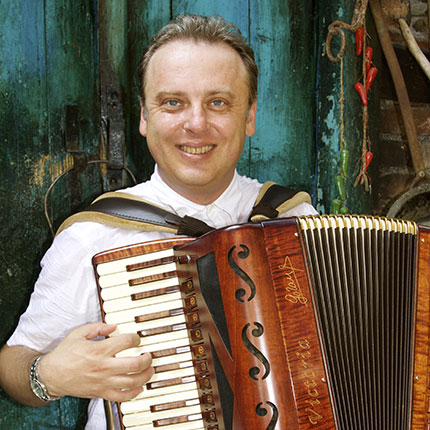 Goran Alachki was born in Pozarevac in 1965. His family was from eastern Macedonia. His father played accordion, trumpet, kaval, mandolin, and tambura, and his grandfather was a great singer and accordion player. Goran started to play accordion at the age of 8 and made his first recording at age 12, as part of the Octet. Macedonia project headed by Dimcevski. In 1989, Goran moved to Australia to teach in the Panov Music Academy in Sutherland, near Sydney. That year, in cooperation with Vince Panov and Nick Ristevski, he created the first Macedonian song festival outside the borders of Macedonia. The winner of that festival represented the Australian Macedonian community at the Valandovo festival.

Between 1992 and 1997, Goran ran the Maestro recording studio, together with singer and accordion player Zoran Markovski. He recorded almost all of the Macedonian festivals that took place during this period. At this time, he also began to work with guitarist Vlatko Stefanovski, of the Macedonian rock band Leb i Sol. Goran and Vlatko played many concerts together, and also performed with the Kino Kultura big band. Goran Alachki is the composer of more than 300 songs, dances and arrangements. Since 1999, he has been the director of the Goran Alachki School of Music. Since 2003, his activities have been supported by the Ministry of Culture of the Republic of Macedonia. He travels the world teaching seminars and workshops in Macedonian traditional music, and holds classes online with students from all around the world. He is founder and director of the Macedonian Pearl Folk Seminar.