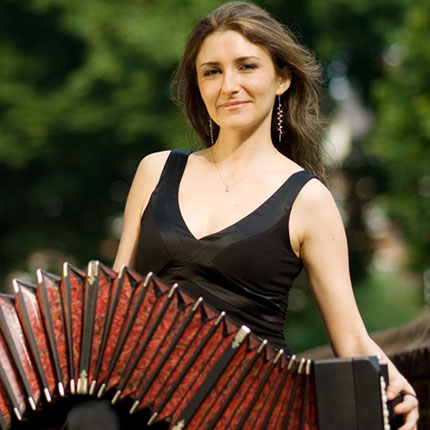 Ms. Kaminska began playing the accordion at the age of eight. By eleven she was competing in international competitions in Bulgaria and Germany, and just a year later gave solo performances in Holland, Austria, and Germany, as well as in her native Poland. Upon receiving a Master’s degree from the Chopin Academy of Music in Warsaw, she came to the U.S. to study at the University of Missouri/Kansas City; at 25 she became the first (and only) person in the U.S. to receive a Doctorate in Accordion Performance.Ms. Kaminska recently performed in a concert entitled “From My Latin Soul,” with legendary tenor Plácido Domingo in Washington, D.C.’s Constitution Hall. Symphony in C featured her in a sold-out performance as soloist in Piazzolla’s Aconcagua concerto for bandoneón, and she recently made a return appearance at the Symphony. She has also been a featured soloist with the Delaware Symphony Orchestra, the Brooklyn Friends of Chamber Music, the Kielce Philharmonic Orchestra of Poland, the Strings of Lodz, the Concord Chamber Orchestra, the North Arkansas Symphony Orchestra, and the Kansas City Chamber Orchestra