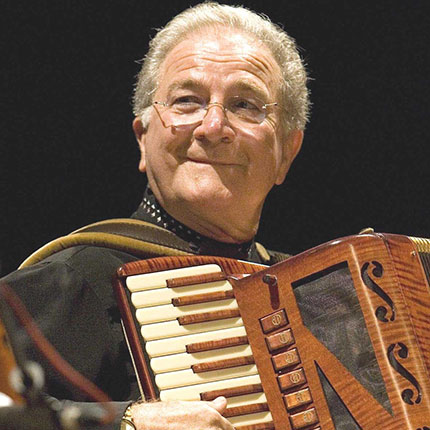 02 Gennaio 1931 (Waukegan, USA) – 3 Marzo 2012 (Los Angeles, USA) Frank Marocco was a star on the firmament of the accordion players.
He has done a great deal of studio session work on the West coast and has become one of the most recorded accordionists in the world.
Frank has played on hundreds of movie soundtracks, TV series and specials, records and commercials. He was nominated eight years in a row as most valuable player by the National Academy of Arts and Sciences (N.A.R.A.S.).
An artist, that can look back on collaborations with Frank Sinatra and Pink Floyd, Prince, Madonna, John Hammond and Luciano Pavarotti, Arthur Rubinstein, Ricky Martin, Brian Wilson, Russel Watson, Liza
Minnelli and Sophia Loren.